Images of work in progress: 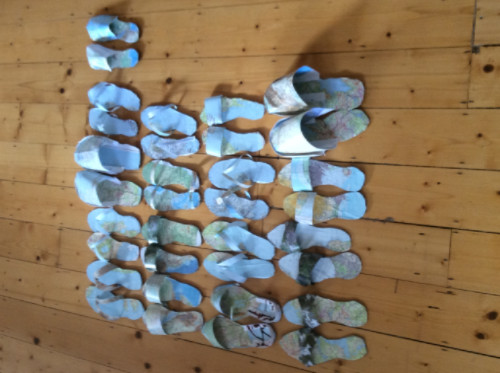 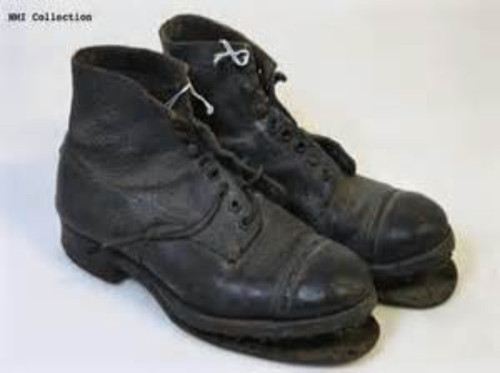 Signal Arts Centre is delighted to be exhibiting an installation
by artist Mark Lawlor ‘I make a pair of shoes from cardboard and cover each shoe with maps,’ says Mark Lawlor. ‘I feel that at the moment it becomes difficult to speak, it becomes easier to just do.’
Lawlor has made hundreds of pairs of shoes. ‘At the moment I’m deciding on how to show them. Some days I think I’ll just leave them in boxes. Other days – stack them on top of each other to form pillars. I just don’t know.’

‘Refugees have been about from the Ice age.  The Old Testament starts with refugees,’ he says. ‘I remember being in London a long time ago as a student and being asked to look after a man from Sri Lanka. We were going to the theatre.  Half way through the show, it was all dark and the leading actor giving her powerful speech, when I felt a sudden movement. The next chair flipped noisily and all of a sudden this man, standing up, takes a picture with a flash! That was theatre! I laughed as I sat him down, in the middle of all the upset… What he had been through in his past life was shocking in the extreme.’

‘Thinking of shoes I remember one night in Italy talking to an old man from Tunisia. He had stood down on the backs of his shoes so that he could remove them with ease. Eventually he showed me a badly worn photograph of his family back in Africa. It was as if he had been waiting for this moment. His voice changed as he spoke to me of them for he knew that I had a family in another country, and he knew that we had this in common. ’

’So you see, shoes.  They are important things. They are there when you want to walk, have to walk. And maps. They show me my way to open the borders in myself, to do something in this crisis. They are using tear gas in an area where there are kids, I see today from the news. How can you, I let this happen? ‘

‘I haven’t decided yet how to show these shoes.’